Thank you to all who entered! This year The Herriman Art Council’s Best Dressed House Contest winners are... With your identity, you may pick up your prize during regular business hours at Herriman City Hall. 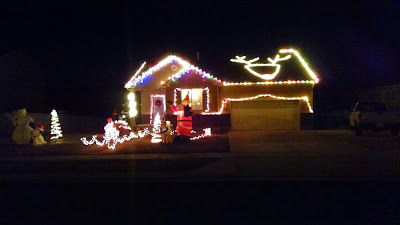 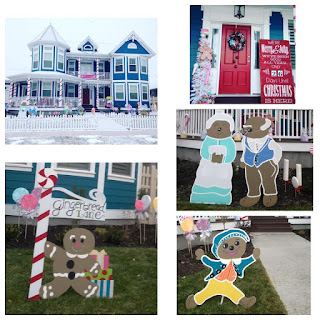 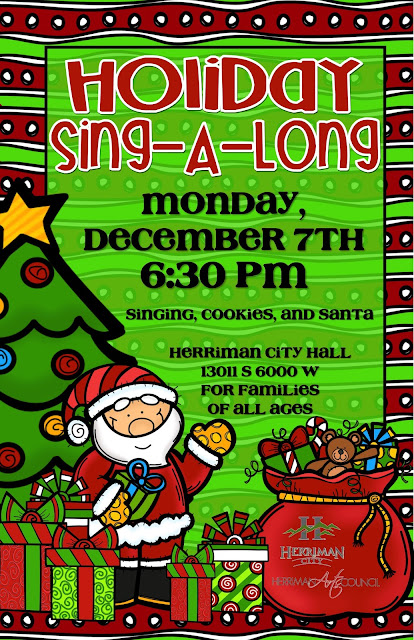 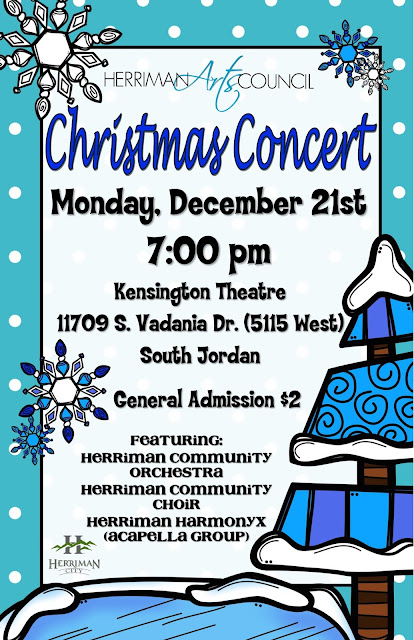 Posted by Herriman Arts Council at 12:38 PM No comments:

An Evening on Broadway - Halloween Theme 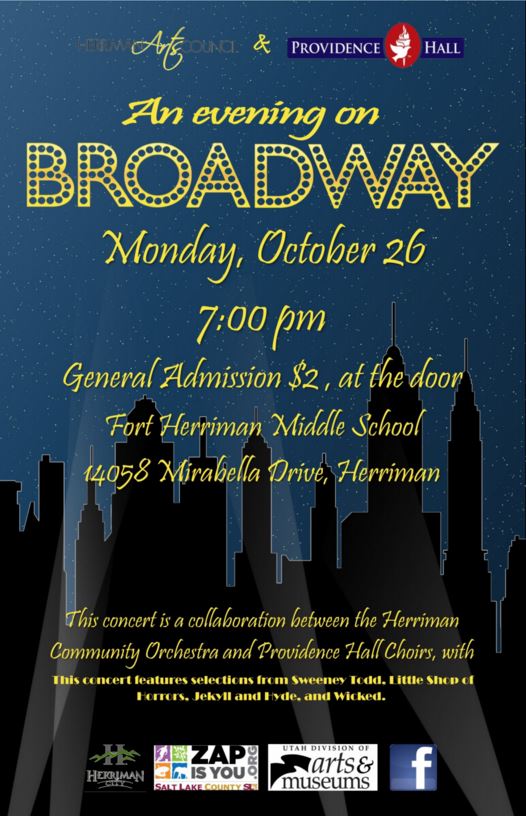 Posted by Herriman Arts Council at 8:07 AM No comments: 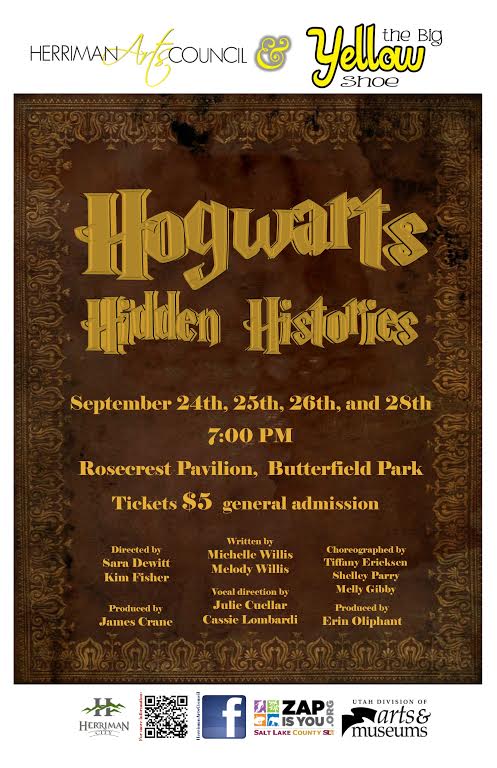 Posted by Herriman Arts Council at 10:40 AM No comments: 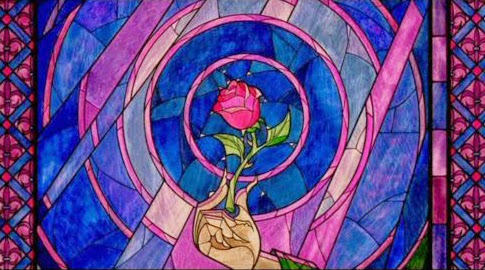 Be Our Guest! The Academy Award-winning film comes to life in this romantic and beloved take on the classic fairytale.

Step into the enchanted world of Broadway's modern classic, Disney's Beauty And The Beast, an international sensation that has played to over 35 million people worldwide in 13 countries. Based on the Academy-Award winning animated feature, the stage version includes all of the wonderful songs written by Alan Menken and the late Howard Ashman along with new songs by Mr. Menken and Tim Rice. The original Broadway production ran for over 13 years and was nominated for 9 TONY Awards including Best Musical.

The classic story tells of Belle, a young woman in a provincial town, and the Beast, who is really a young prince trapped under the spell of an enchantress. If the Beast can learn to love and be loved, the curse will end and he will be transformed to his former self. But time is running out. If the Beast does not learn his lesson soon, he and his household will be doomed for all eternity.

This "tale as old as time" is a beloved classic the whole family will enjoy!.

The cast, orchestra, and production team are comprised of residents of Herriman as well as actors and musicians all along the Wasatch Front.

HAC has made a name for itself in community theatre and has a reputation for producing high quality, family friendly, and affordable entertainment. In fact, it can be argued that HAC's productions surpass the typical community theatre experience. Our show features a full, live orchestra to further enhance the experience.

Disney's Beauty And The Beast is the eleventh summer production sponsored by the Herriman Arts Council. The last four productions, SHREK, The Musical (2014), Peter Pan (2013), Annie (2012) and Joseph and the Amazing Technicolor Dreamcoat (2011) received raving reviews and attracted record attendance. It is worthy to note that all four shows were featured in the top five most accessed shows at utahtheatrebloggers.com, a website that showcases and reviews all theatre opportunities in Utah.

"The Herriman Arts Council thanks the voters of Salt Lake County for their support of the Zoo, Arts & Parks program. One-tenth of one percent of the Salt Lake County sales tax goes to support local cultural, botanical, and zoological organizations. This funding has not only stabilized many of Salt Lake’s cultural organizations, but has also funded the construction of new recreational facilities, and improved walking trails. ZAP funding helps to provide “free” days, free concerts, reduce ticket prices for students, and provide in-school programs for children in grades kindergarten through twelfth grade.”
Posted by Herriman Arts Council at 11:57 AM 1 comment:

Auditions for HAC musical production of "Disney's Beauty And the Beast" 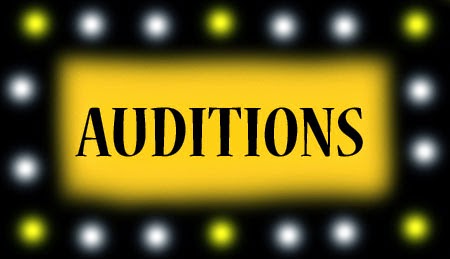 Auditions for the Herriman Arts Council summer musical production of “Disney's Beauty And The Beast” will be held Saturday, March 28, 2015 from 8am - 1pm at Herriman City Hall, 13011 S. Pioneer St, Herriman, UT. All roles are open. For this production, we are only auditioning those who are at least 14 years old at the time of auditions, except for those auditioning for the role of Chip.

Auditions for the role of CHIP will be held on Thursday, March 26, 2015 from 7pm - 9pm at Herriman City Hall, 13011 S. Pioneer Theatre Company St, Herriman, UT. Children 8-11 years old are open to audition for the role of "CHIP". You must be at least 8 years old at the time of the audition.

The show will be directed by veteran local actor of over 35 years, Stephen Kerr. Stephen was the director of our five previous HAC productions, serves on the Board of Directors for the Utah Actors Association, has performed at various local and regional theaters, including Pioneer Theatre Company, The Egyptian Theatre, Desert Star Playhouse, and is a regular performer at Hale Centre Theatre including 2014 productions of A Christmas Carol (Scrooge) and Les Miserables (Thernardier).

Call back auditions will be by invitation only Tuesday, March 31, Wednesday, April 1, and Thursday, April 2nd.

The intent of the Herriman Arts Council is to cast between 30-35 men, women, and one child to play the following roles in our 2015 production of Disney’s Beauty and the Beast.

BELLE (Stage Age: 18-30) Mezzo-Soprano: Low A-High F
Intelligent. Loving. Kind and friendly. A dreamer who wants a life full of adventure. Loves to read and has a vibrant imagination. Bored in her town. Devoted to her father. Townsfolk think she’s odd. Very beautiful. This role requires a very strong singer who portrays innocence with her singing and speaking voice.

THE BEAST (Stage Age: 21-35) Baritone: A–High F (optional A flat)
A figure haunted by his past mistakes. Quick temper and prone to anger. Angry at himself for what he did but takes it out on others. Despite this, he has an inner beauty. Used to be a prince, therefore he is noble. This role requires a very strong singer, and must have a strong speaking voice and stage presence.

GASTON (Stage Age: 21-35) Baritone: A–High F
Very egotistical and in love with himself. The town hero - and knows it. A hunter. Strong. Loves the attention he gets from the town, especially from girls. Quite cruel and malicious – happy to manipulate people and use them, such as Maurice, to get what he wants. This role requires a strong singer and character actor who moves well and not afraid to show off his physique.

LUMIERE (Stage Age: 30+) Baritone: A–High F sharp
Lumiere is the French butler who was transformed into a Candelabrum. He is light-hearted, suave, romantic, smooth-talking, and charming. He has a romantic involvement with Babette. This role requires strong character acting, comedic skills / timing, and he should move well. This character speaks with a French accent.

LEFOU (Stage Age: 18+) Baritone: B–High F Sharp
Lefou is Gaston’s dim-witted, servile sidekick. He goes to extraordinary lengths and suffers repeated humiliation in his efforts to please his master. The actor must be comfortable with physical comedy, and the role requires strong character acting.

COGSWORTH (Stage Age: 30+) Baritone: A–High E
Cogsworth is a tightly-wound, enchanted mantle clock and the head of the Beast’s household. He is a stuffy English man who loves perfection. This role requires strong character acting.
This character speaks with a British accent.

BABETTE (Stage Age: 20’s-40’s) Alto or Soprano: C–C (high C is not a solo)
Babette is a saucy, enchanted feather-duster, and the object of Lumiere's affections. This role requires good character acting and she should move well, as she dances a tango with Lumiere during Be Our Guest. This character speaks with a French accent.

MAURICE (Stage Age: 40+) Baritone: B flat–High D flat
Despite being a bit scatter-brained, there is no mistaking Maurice’s steadfast love for his daughter Belle. Kindly, gentle, enthusiastic and inventive, he becomes single-minded and determined when Belle faces danger. Maurice and Belle sing the lovely duet No Matter What.

MONSIEUR D'ARQUE (Stage Age: 25+) Tenor: D–High A
D’arque is the creepy, scheming proprietor of the local insane asylum, The Maison De Lune. He doubles as a townsperson.

CHIP (Age 8-11 years old) Boy Soprano: D–High D
Chip is an inquisitive little teacup who is the son of Mrs. Potts. You must be at least 8 years old on the date of auditions for this role.

ENSEMBLE (TOWNSPEOPLE - THE ENCHANTED OBJECTS)
We will cast approximately 20-25 ensemble roles (8-10 men, 10-15 women). The ensemble is very busy, as they are both townspeople and enchanted objects. There are several solo lines in songs like Belle and The Mob Song, and many great dance numbers (Gaston, Be Our Guest, and Human Again). The Enchantress and Young Prince, the Baker, the Baker’s wife, Bookseller, Monsieur D’Arque, Silly Girls are all chorus members. Four to six chorus members will be wolves who fight the Beast. We are also looking for one-two acrobats. To audition for the ensemble, you must be at least 14 years old on the date of the auditions.

All audition information and/or dates are subject to change without notice.

"The Herriman Arts Council thanks the voters of Salt Lake County for their support of the Zoo, Arts & Parks (ZAP) program. One-tenth of one percent of the Salt Lake County sales tax goes to support local cultural, botanical, and zoological organizations. This funding has not only stabilized many of Salt Lake’s cultural organizations, but has also funded the construction of new recreational facilities, and improved walking trails. ZAP funding helps to provide “free” days, free concerts, reduce ticket prices for students, and provide in-school programs for children in grades kindergarten through twelfth grade.”
Posted by Herriman Arts Council at 9:21 AM No comments:

Join us for a fantastic evening as Herriman Harmonyx treats us to a night of laughter, romance and desert. Thursday 12th - Saturday 14th Check our event for show times and to purchase tickets https://www.facebook.com/events/1600382126865563/ 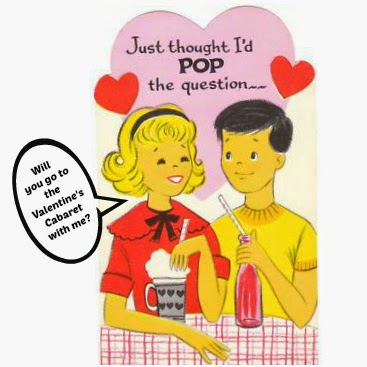 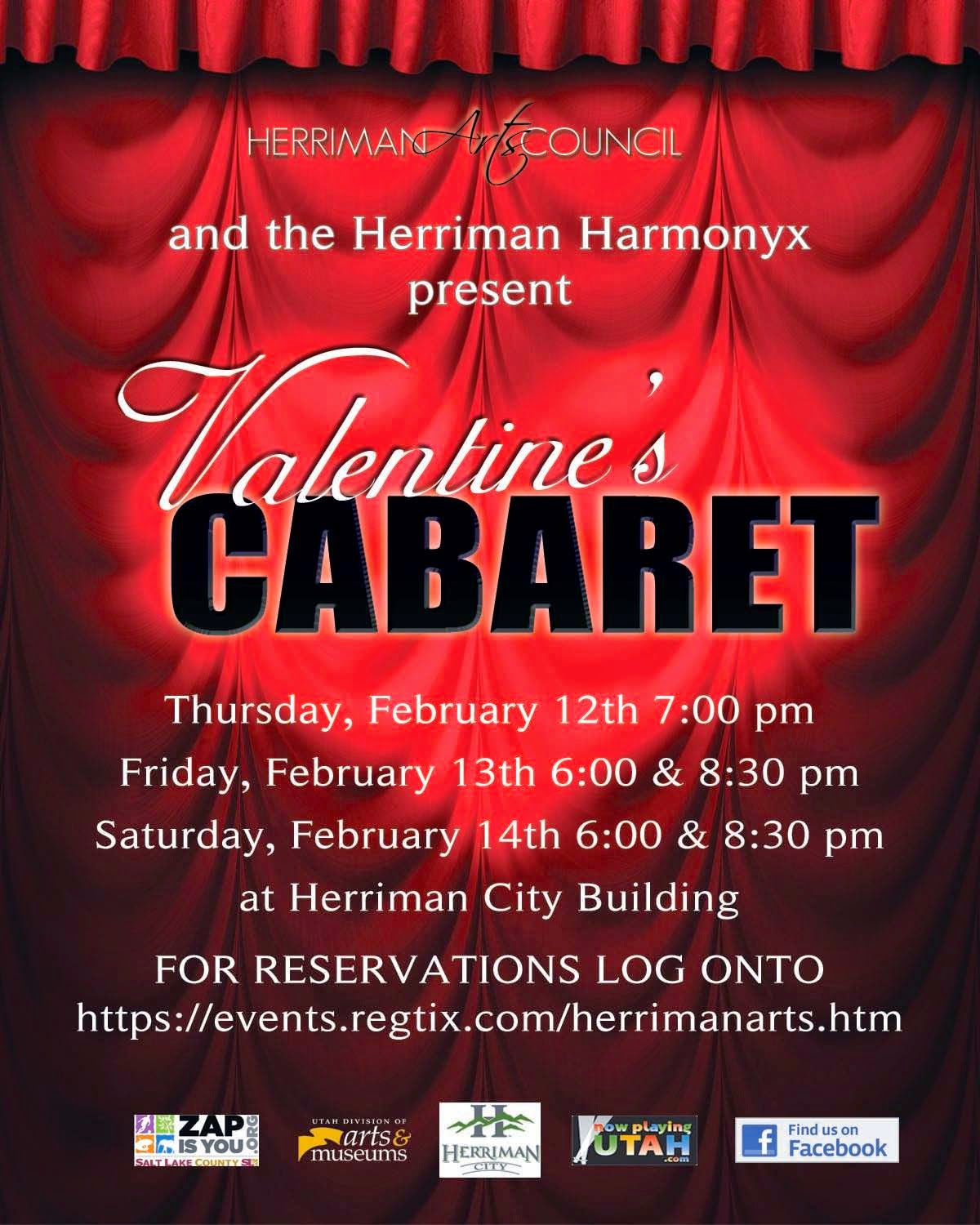 Here is a sneak peek of what you have to look forward to this Valentine's Cabaret...
https://www.youtube.com/user/HerrimanArtsCouncil/videos